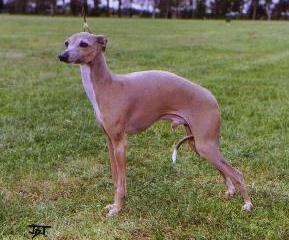 Elegant and graceful, rather like a Whippet in miniature. Very affectionate and a little timid he has a long head small thin ears and a long neck. The coat is smooth and fine.
Colours are solid grey, slate grey, black, all shades of fawn or white cream, red or any of those colours with white.

All pictures will expand when clicked.
If the curser is held over the picture for a second or two, you will see the details of each dog
(the latter only works in Iexplore not Netscape)

All broken pictures need entries! Can you help?

For pictures of the top dogs in Scotland by Michael Trafford

This breed has Kennel Club Challenge Certificates at most Championship Shows.

Stonehenge (1872) says - ' in shape he should as nearly as possible resemble the English Greyhound in all but size' and that the 'the chief points characteristic of the Italian greyhound are shape colour and size'
He mentions nothing of the History of the breed but say's
' The colour most prized is a golden fawn. The dove-coloured fawn comes next. Then the cream colour, and blue fawn or fawn with blue muzzle, black-muzzled fawn, the black-muzzled red, and plain red, yellow, the cream-coloured, and the black; the white, the blue, the white and fawn, and white and red. Whenever the dog is of a whole colour, there should be no white whatever on the toes, legs or tail; and even a star on the breast is considered a defect, though not so great as on the feet.'
Size most prized is about '--- six to eight pounds -- ' Stonehenge also gives a pedigree of (Mr Gowan's) Billy. (1850's) and (Mr Hanly's) Minnie.

Leighton (1912) Gives a much better idea if the history saying ' - - - Greek art presents many examples of a small dog of greyhound type. and that there is a probability that diminutive breed was a familiar ornament in the atrium of most Roman villas - - ' also that '- - - in Pompeii a dwarfed Greyhound was certainly kept as a domestic pet, and therefor some justification for the belief that the Italian prefix is not misplaced - - '

Idstone (1871) pronounced that Mr Macdonald's Molly was the most perfect specimen ever seen; but it was said she was overshot.

For pictures of the top dogs in Scotland by Michael Trafford